Being sent to Coventry is not ordinarily an experience that we aspire to, let alone is it what constitutes a nice birthday surprise; for the 3 elder girls we decided that this was precisely what they needed. So we piled them in the car on the 22nd May 2013 and did precisely that, we said precisely nothing to them! At least, we said nothing about where the final destination was. Coventry it was, Ricoh Arena to be precise and a date with those darn Teignmouth Boys. Sadly we missed the opening act Bastille who we fortunately caught later in the year at Leopollooza and true… we did have to sit through the nonsense that was Dizzee Rascal “What the fuck you talking about Birmingham?” What followed though was to be remembered. For two of the girls, this was their first big concert and I think lays the bar pretty high for the rest of their gig going life. For all of us it was the first time as a family we had got to indulge our passion for music together. But mainly it was to be remembered for this:-

Just for once it was not me who was crying; overcome with emotion at hearing unintended played for the first time in many years my girlfriend put me to shame. I’m sure she won’t thank me but the photo below is one I managed to find as testament to that magical evening in the industrial heartland of England, Probably not too far from Solihull….. 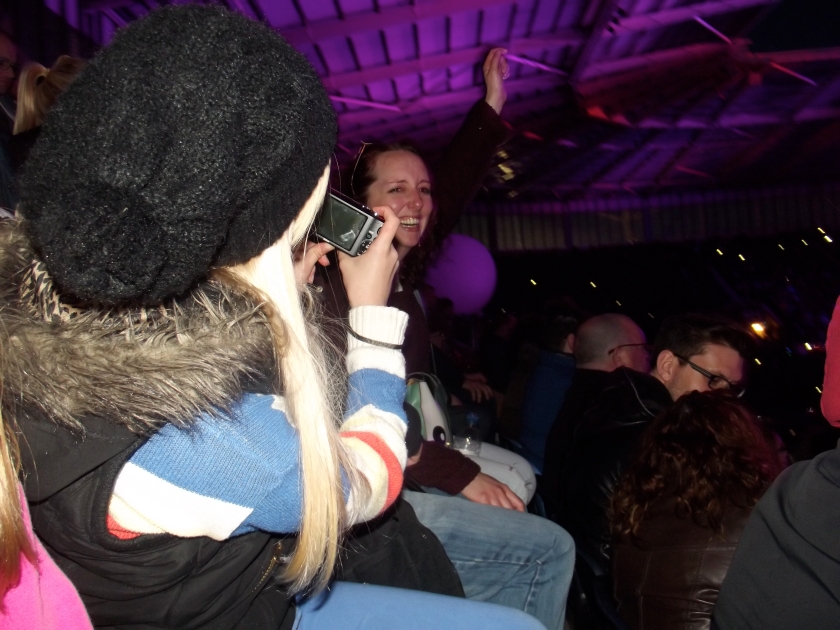 If youre interested in the set list from this evening thos guys at setlist.fm are on it as per usual:-

I normally like to get some video of the events that is personal to us, you know the sort of thing, someone from across the stadium caught my left earlobe in frame 31 and its quite obviously mine etc etc…. Sadly we were so far back that this was not possible, Instead this very random video of our own from the end is what I’d like to share.

Aside from the actual music itself there are two things I love about gigs:- Firstly,  the 2 minutes before, and as the main act come on and start to play. I love being toward the front, thinking you are all crammed in tight everyone baying for the band and then they appear… Screams, shouts and lots of holding of heads. As the first chord is struck it happens, that magical moment, the whole audience as one take two steps forward with new found space. I love that moment, so very surreal and yet forgotten about almost immediately.

Secondly, I love the feeling of love, chaos and confusion immediately after the show. Yes, the act are gone, the lights are up and the night is ending but the adrenalin and the feel good factor are running high in everyone in the stadium. Aside from the unconscious drunks there’s not a person in that space with anything other than joy in their heart. We are all lost sheep, aimlessly at first, heading towards the exits from the battleground that filled our ears and minds until just a short a minute ago. The music had invaded us completely, whatever issues and troubles we arrived with seem to be suspended at least until reality has time to resume and exert control again. This video to me displays this, it is us wending our way out of the stadium, for want of a better word ‘stoned’ in the moment.

Late, Great and Difficult to Know!